From Standing Rock to Mexico City to Ayotzinapa to Cuetzalan: Action for Peace, Life & Water 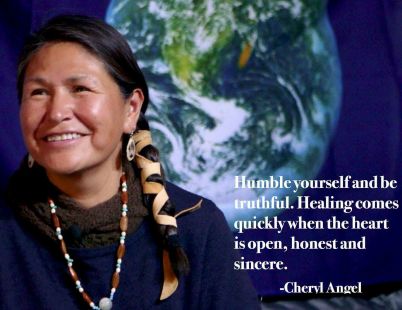 PRESS RELEASE:
Action for Peace, Life and Water
From Standing Rock to Mexico City to Ayotzinapa to Cuetzalan
February 17-21,  2017

This February 16th, Cheryl Angel is coming from Inyan Woslol Najin –Lakota for “Standing Rock”–, North Dakota to Mexico City as a way to transcend borders and show up in solidarity with indigenous people. Her visit has the intention to support and promote the unity among organizations and movements which protect water, land and life itself all over the Planet, through the fearless love embodied by the leadership of our women. OraWorldMandala –Extension Programme in the part of the Planet we call México, Gujarat Vidyapith (University founded by Mahatma Gandhi in 1920)— together with the Cooperative Union Tosepan Titataniske –Nahuatl for “United We Will Overcome”– will be organizing her visit.

Cheryl Angel is an indigenous leader, wise (Sioux)Lakota elder woman, lifelong devoted water protector, mother of 5 children from the Sicangu tribe in South Dakota, who was key in helping stop the Keystone XL pipeline a couple of years ago. Now she has been part of the nonviolent resistance at the Standing Rock camp since April 2016 to stop the Dakota Access Pipeline (DAPL) –a project of the Texas based corporation Energy Transfer Partners. As of now, the pipeline has disrespected sacred Lakota burial grounds and is drilling under the Missouri river to pass under the Oahe lake, all land part of the Standing Rock Sioux Reservation. This project of death was temporarily halted –last December– by the administration of Barack Obama, and it has as one of its investors in Donald Trump. DAPL puts in risk the drinking water of close to 12 million people downstream and, once again, ignores the treaties between the government imposed in the part of the Planet we call the U.S. and Indigenous Peoples.

Cheryl Angel has travelled to the part of the Earth we call Mexico to be part of a caravan called by the Camp members of the 43 Disappeared-Detained and Political Prisoners –formed by the parents of the 43 rural students who were disappeared in Ayotzinapa (#Ayotzinapa43). The caravan also includes students from different rural teacher training centers and representatives of various communities defending land and water. They will be leaving Mexico City next Friday February 17th for Cuetzalan, Puebla, to attend the 18th Land Defense Assembly of the Macehual People, on the next day, Saturday February 18th.  The purpose of this caravan is to gather social movements that defend life and the land to reflect on their struggle to collectively create Peace and Nonviolence. Thus, fully aligned with Cheryl Angel’s experience of integrating prayer with direct action, as she guided two women-led actions at Standing Rock –she moves from a deep space of nonviolence as guided by her ancestors and Lakota traditions and ways of being.

Sunday afternoon the caravan will return to Mexico City and on Monday February 20th at noon we will have a press conference to address national and international media. The press conference will be held in front of the Tlaloc monolith at the Anthropology and History National Museum. Following the motto “Water Is Life”, the flow of Cheryl Angel’s visit takes her from supporting Indigenous Peoples and the sovereignty of their bioregions; to honor the water in one of the largest cities of the World that was build on top of a system of lakes; to align our minds, hearts and hands with the means we are protecting water, land and our own lives. For this reason, the next natural point in Cheryl Angel water-like visit is the monument of Mahatma Gandhi where there’s going to be a cleanup of the surroundings. This cleanup is done as a way to stress the importance of having a clear-clean mind and to encourage spiritual people to become active and activists to become spiritual –a fundamental way to regenerate in the struggle of our collective liberation. Media are welcome to join us.

To have a clear, sharp and quiet mind allows us to recognize the voice of the heart and it leaves it to speak loudly and freely. And what better heart-voices to demonstrate this, than those of our mothers. Then Cheryl Angel, the mother, will get together with the mothers and fathers of the disappeared students –the Ayotzinapa 43– at the Antimonument +43, where they will sow a ‘Forget Me Not’ plant. A reminder to anybody trying to suppress a just and fearless social movement:  “they(the government) try to bury us, little did they know we are seeds.”

As a way to remind us of the importance of the vital fluid, on Tuesday February 21st at 10am , right before her departure, Cheryl Angel will be visiting the Cárcamo de Dolores at the second section of the Chapultepec Forest where the mural of Diego Rivera, and later work of Ariel Guzik, illustrates the origin of life and how water connects us all and with all.

Cheryl Angel has the intention to be back to Standing Rock on Tuesday February 21st given the executive memorandums signed by Donald Trump a couple of weeks ago, allowing to finish the pipeline on Lakota treaty land. That’s why we all continue to organize a strong resistance to support them from the part of the Planet we call Mexico

The visit of Cheryl Angel in this critical moments of global warming, of political negligence and social divide, is an example of solidarity build from below among indigenous peoples, social movements, students and people receiving the violence of the state, it is an example of a way to weave a deep unity despite these neoliberal atrocities. While some politicians are talking about the construction of walls, we are building bridges to transcend borders. While these men try to impose projects of death to exploit Mother Earth, we build projects of life coming from the true sovereignty of the peoples. While they try to impose themselves through violence, fear and suffering, we have decided to choose the path of dignity, of joy, of love, of courage and of peace coming from our struggles’  kinship.

2 Responses to From Standing Rock to Mexico City to Ayotzinapa to Cuetzalan: Action for Peace, Life & Water