For 95 days, Pancho walked from Oakland to the Mexico border, building living bridges across human hearts, wherever life took him. Earth Familia. As Angela summarized, “Pancho carried no food, no water, no currency, no intoxicants, no doubts. Just love!”

Here is Day 1 blessing before he departed, on March 12th, the anniversary of the Gandhi’s salt March: 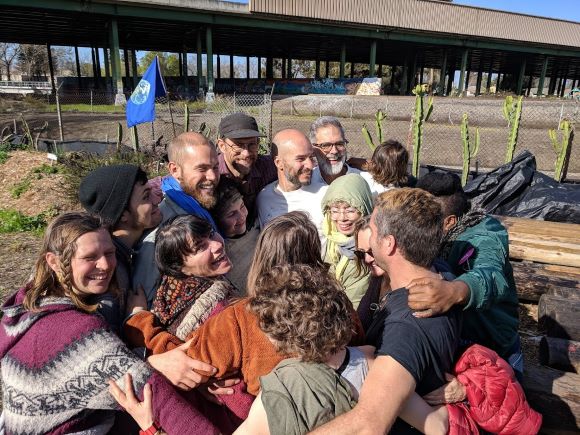 At the border, he climbed up the metal rods and barbed wire, to represent an Earth flag. Randall shared, “To see Pancho express his ‘One Earth’ vision so directly to the dehumanized machine sends chills down our spine … because it reminds us of our own humanity.”

To every interrogation question, he responded with his unflinching broader frame. Where are you from? Planet Called Earth. How old are you? 4.6 billion years. Do you have an ID? No, just my humanity. Anything else? I want you to know that I love you.

He was released into Tijuana, incidentally on “silent Monday”. As he crossed the border yesterday, surely, his entire being was vibrating to the tune of “Jai Jagat. Gloria el Planeta! Glory to the Planet.” John (Malloy) aptly said, “Generations to come will benefit this pilgrimage of the heart.”

From Tijuana, Pancho sent us this email last night:

So powerful to have felt you all as I was in jail for a couple of days. As the tradition has been, this is my first email before catching up with the rest of the inbox. Now that I’m in Tijuana, I’ve getting sporadic cellphone reception through Signal and Whats App.

Over the last few days, when I was in small prison cell (3.5m x 5m) with 15 fellow migrant detainees in it, some of them got curious about meditation, so we meditated — with some instructions in Spanish. It is always rewarding to feel the shift in energy of the place afterwards and hearing them describing that “unreachable-by-the-system inner peace”, a glimpse of equanimity and real freedom.

Despite having been denied to make a single phone call, many of them detained already for 17 days and still without external communication — with some of us sleeping on the floor next to the toilet where everyone can see you urinating and pooping … despite all this, the signs of solidarity and kindness among the inmates/roommates was very touching. As a routine welcome for a new “roommate”, they share tips to make strings to hold your pants or make shoelaces out of the emergency mylar thermal blankets.

My sweet cousin — who took care of me when I was less than a lap around the Sun and when she herself was just 14 — took me to her home as I got out in Tijuana.

As we walked the streets of Tijuana downtown, the rivers of smells and people and colors and sounds were a test to keep cultivating the pilgrim awareness and the inevitable wonder that bridges the gap of what sometimes feels like an abyss that separate us from ourselves… all of a sudden –in the midst of this storm of sensations — a silent prayer descends to our heartmind, a nothingness at the center of all loves, a suchness that knows that we cannot find the meaning of life by ourselves alone, we find it with one another, we find it in the intimacy of connecting with another sentient being, a deep vibrating of one’s entire being in the form of a smile that resonates as a string attached to the wood instrument of everything that is.

There’s awe — and tragedy, as I hear 12 gunshots just now. As most people sleep, an unfortunate message is imprinted into this city’s field and our collective subconscious. In the morning, though, I am heading to “Little Haiti” where an amazing pastor –hermano Gustavo– is doing great service for the migrant families and community in general.

Please know that I carry each and every one of you deep in my heart of hearts. As this Jai Jagat journey and pilgrimage carries on, it has been only been possible thanks to all the inspiration and deep love I continue to receive. It makes a difference, an Astronomical difference.

Kosmic ablessos on your way!

See you on and off the cushion! 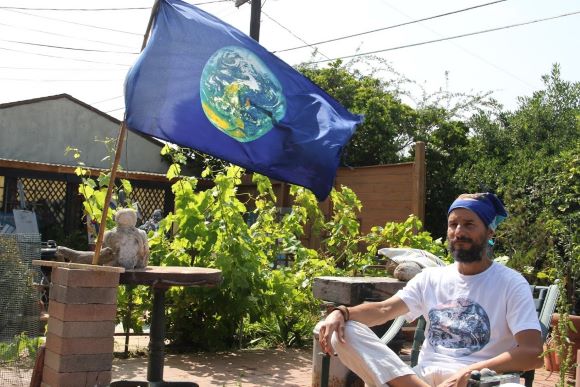 [P.S. Speaking of small acts of kindness, the first thing Pancho did is call the family members of his 15 inmates, who have been refused to make an external contact for the last 17 days and whose families are since worried sick if their loved ones are still alive. No paper or pen were allowed, but it would be just like Pancho to memorize them. Never wasting a chance to be of service. #OnlyPancho]

We love you Pancho!

To live in radical joyous shared servanthood to unify the Earth family.
View all posts by pancho →
This entry was posted in Uncategorized. Bookmark the permalink.