The Transition/Composting of Casa de Paz

It has been a ONEderful journey, full of learning and unexpected opportunities to be in shared servanthood on this land that was –and still is!– deeply honored by the Indigenous Ohlone People. These Native Americans used to call it Huichin (mostly the East Bay).

It is of must importance to continuously and perpetually reflect about one’s ways to serve the Earth, because it may be that the circumstances have changed. The residents of Casa de Paz at Canticle Farm considered it was time to dive deeper into the values and pragmatic idealism that brought us together in the first place, to strive for the best human beings we can be. If one looks at the mirror and a genuine love flows from within to gently reaffirm: “yes, I can look at you in the face and say you are doing the best you can.” If not, one needs to catalyze change by waiting without anxiety for the signals that Nature wants us to follow. We had the intention to be Casa de Paz in Fruitvale for a decade but during the sixth year of this journey we started a different track to ignite the Great Turning in another place: one heart, one home and one block at a time.

So when we were offered the gift to find a piece of land and/or a house in East Oakland, we naturally accepted the present and started to look for such place. After more than a year or so to look for it, for different reasons –sometimes it was clearly the uncertainty of our own life’s paths–, we still couldn’t find anything suitable for the continuation of this experiment in integral nonviolence, and we found ourselves in a situation where we needed to leave Canticle Farm without having a place where to land yet.

But the providence has surprises, and one of the neighbors –a member of the Hidden Creek Co-Housing Community– told us there was a house available in their community just up 36th ave. So in matter of a few days we connected with the landlord and we were able to temporarily rent a small house that we call now Manantial de Luz (Spring of Light). The address is 2070 36th ave, Oakland, 94601 California, Earth (map). 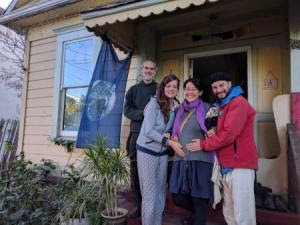 60% of the latest configuration of Casa de Paz’ crew left to initiate a path of parenthood in the part of the Planet we call Japan. Habibi Sam, Hiromi-chan and Bubble-chan –the yet-to-be-born baby!– are now in a six month journey to welcome Bubble-chan in a gentle and integral nonviolent manner. The intention of this new family is to be able to establish a sister community/farm/retreat-space in the rural side of the Bay Area and they have been already exploring different alternatives about how this could manifest. So we are looking forward to seeing how we could re-integrate, one way or another, when the Ui-Bower family comes back to this part of the Earth.

All layers of things change, more visible outside than inside but our gratitude for it all and commitment to our shared values is strong. Many people where touched by this experiment in community called Casa de Paz, and in doing so, our own lives were transformed as well. We deeply appreciate the multiple forms of wealth many of you have already gifted us in this journey to live in community. We are astronomically grateful for all the people who contributed with their attentive loving presence –from neighbors who became family, to love-ties friendships who continue creating ripples of goodness– and folks who actually lived with us, creating a more resilient, harmonious and loving Casa de Paz: Adelaja, Basje, Bubble-chan, Carmen, Ericka, Eva, Hiromi, Jason, Mallika, Mike, Miriam, Miyuki, Niki, Pancho, Sam, Sara, Veena, Wren, Xiao, Zilong and all the many short and long term guests who blessed us with their visits. And of course, all the Canticle Farmers, starting with Terry and Annie who invited us to start this adventure in this part of Oakland.

Gandhi wrote in one of his letters to a inquisitive writer about the power of living in community and the intention supporting it. So we are going to paraphrase him here:

“Just think, the question doesn’t arise for any one to ask any one to leave. When Casa de Paz will be too feeble to sustain itself, there would be no need to consider as to who will stay and who shall be dismissed. Those who are totally committed shall survive — the question then will be, ‘Who qualifies to survive?’ We do not pay salaries but provide food. When that also is squeezed, who will stay enduring hardships, living on dry crumbs? That is the question. Even ‘Casa de Paz’ will not stay in Casa de Paz for ‘Casa de Paz’ is an ideology  — it will be where the ideology is. All these experiments are test cases to be applied latter, if found valid, on any part of the Planet where we want to reconnect ourselves with our true essence and our real and only mother, the Earth. If you believe that we are endowed with a strong will, you too are! For the Universal Love has endowed us with similar “Will”. The moment you shake off doubts about the capacity of your will, habitual fear, apprehensions, indecisiveness, we shall be all alike. The difference is that we have persevered hard to cleanse ourselves of many set taboos; if you too endeavor to preserve with determination, you too should be able to do it.”

May the compost of Casa de Paz serve as rich soil to nourish our collective soul and ignite the inspiration of society.

In deep gratitude and service,