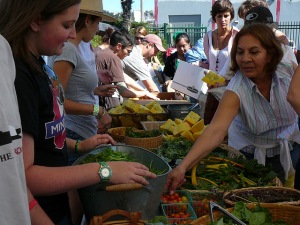 Today we honor a wise teacher, an inspiring leader, and a true visionary, but to truly honor Dr. Martin Luther King Jr. we must do more than say words of praise. We must learn his lessons and put his views into practice, so that we may truly be free at last. […]

Dr. King was a radical in his beliefs about violence. He learned how to successfully fight hatred and violence with the unstoppable power of nonviolence. […]

My friends, as we enter a new decade, it should be clear to all of us that there is an unfinished agenda, that we have miles to go before we reach the promised land. The men who rule this country today never learned the lessons of Dr. King, they never learned that nonviolence is the only way to peace and justice. Our nation continues to wage war upon its neighbors, and upon itself.

The powers that be rule over a racist society, filled with hatred and ignorance. Our nation continues to be segregated along racial and economic lines. The powers that be make themselves richer by exploiting the poor. Our nation continues to allow children to go hungry, and will not even house its own people. The time is now for people, of all races and backgrounds, to sound the trumpets of change. As Dr. King proclaimed “There comes a time when people get tired of being trampled over by the iron feet of oppression.”

My friends, the time for action is upon us. The enemies of justice wants you to think of Dr. King as only a civil rights leader, but he had a much broader agent. He was a tireless crusader for the rights of the poor, for an end to the war in Vietnam long before it was popular to take that stand, and for the rights of workers everywhere. Many people find it convenient to forget that Martin was murdered while supporting a desperate strike on that tragic day in Memphis, Tennessee. He died while fighting for the rights of sanitation workers. Dr. King’s dedication to the rights of the workers who are so often exploited by the forces of greed has profoundly touched my life and guided my struggle.

During my first fast in 1968, Dr. King reminded me that our struggle was his struggle too. He sent me a telegram which said “Our separate struggles are really one. A struggle for freedom, for dignity, and for humanity.” I was profoundly moved that someone facing such a tremendous struggle himself would take the time to worry about a struggle taking place on the other side of the continent. Just as Dr. King was a disciple of Gandhi and Christ, we must now be Dr. King’s disciples.

Dr. King challenged us to work for a greater humanity. I only hope that we are worthy of his challenge.

The United Farm Workers are dedicated to carrying on the dream of reverend Martin Luther King, Jr. My friends, I would like to tell you about the struggle of the Farm workers who are waging a desperate struggle for our rights, for our children’s rights and for our very lives. Many decades ago the chemical industry promised the growers that pesticides would bring great wealth and bountiful harvests to the fields. Just recently, the experts are learning what farm workers, and the truly organized farmers have known for years. The prestigious National Academy of Sciences recently concluded an exhaustive five-year study which determined that pesticides do not improve profits and do not produce more crops.

What, then, is the effect of pesticides? Pesticides have created a legacy of pain, and misery, and death for farm workers and consumers alike. The crop which poses the greatest danger, and the focus of our struggle, is the table grape crop. These pesticides soak the fields. Drift with the wind, pollute the water, and are eaten by unwitting consumers. These poisons are designed to kill, and pose a very real threat to consumers and farm workers alike. The fields are sprayed with pesticides: like Captan, Parathion, Phosdrin, and Methyl Bromide. These poisons cause cancer, DNA mutation, and horrible birth defects.

The Central Valley of California is one of the wealthiest agricultural regions in the world. In its midst are clusters of children dying from cancer. The children live in communities surrounded by the grape fields that employ their parents. The children come into contact with the poisons when they play outside, when they drink the water, and when they hug their parents returning from the fields.

And the children are dying. […]

These same pesticides can be found on the grapes you buy in the stores. […]

My friends, the suffering must end. So many children are dying, so many babies are born without limbs and vital organs, so many workers are dying in the fields. We have no choice, we must stop the plague of pesticides.

The growers responsible for this outrage are blinded by greed, by racism, and by power. The same inhumanity displayed at Selma, in Birmingham, in so many of Dr. King’s battlegrounds, is displayed every day in the vineyards of California. The farm labor system in place today is a system of economic slavery.

My friends, even those farm workers who do not have to bury their young children are suffering from abuse, neglect, and poverty. Our workers labor for many hours every day under the hot sun, often without safe drinking water or toilet facilities. Our workers are constantly subjected to incredible pressures and intimidation to meet excessive quotas. The women who work in the fields are routinely subjected to sexual harassment and sexual assaults by the grower’s thugs. When our workers complain, or try to organize, they are fired, assaulted, and even murdered.

Just as Bull Connor turned the dogs loose on nonviolent marchers in Alabama, the growers turn armed foremen on innocent farm workers in California. The stench of injustice in California should offend every U.S. citizen. Some people, especially those who just don’t care, or don’t understand, like to think that the government can take care of these problems. The government should, but won’t. The growers used their wealth to buy good friends like Governor George Deukmajian, Ronald Reagan, and George Bush.

My friends, if we are going to end the suffering, we must use the same people power that vanquished injustice in Montgomery, Selma and Birmingham. I have seen many boycotts succeed. Dr. King showed us the way with the bus boycott, and with our first boycott we were able to get DDT, Aldrin, and Dieldrin banned in our first contracts with grape growers. Now, even more urgently, we are trying to get deadly pesticides banned.

The growers and their allies have tried to stop us for years with intimidation, with character assassination, with public relations campaigns, with outright lies, and with murder. But those same tactics did not stop Dr. King, and they will not stop us.

My friends, Dr. King realized that the only real wealth comes from helping others. I challenge each and every one of you to be a true disciple of Dr. King, to be truly wealthy. I challenge you to carry on his work by volunteering to work for a just cause you believe in. Consider joining our movement because the farm workers, and so many other oppressed peoples, depend upon the unselfish dedication of its volunteers, people just like you. Thousands of people have worked for our cause and have gone on to achieve success in many different fields.

Our nonviolent cause will give you skills that will last a lifetime. When Dr. King sounded the call for justice, the freedom riders answered the call in droves. I am giving you the same opportunity to join the same cause, to free your fellow human beings from the yoke of oppression. I have faith that in this audience there are men and women with the same courage and the same idealism, that put young Martin Luther King, Jr. on the path to social change. I challenge you to join the struggle of the United Farm Workers. And if you don’t join our cause, then seek out the many organizations seeking peaceful social change. Seek out the many outstanding leaders who will speak to you this week, and make a difference.

If we fail to learn that each and every person can make a difference, then we will have betrayed Dr. King’s life’s work. The reverend Martin Luther King, Jr. had more than just a dream, he had the love and the faith to act.