[An email sent to the satyagrahis involved in the Berkeley Treesit]

From this inspiring place, Mani Bhavan, I could only sit down and write this email to you. Gandhi learnt carding and he also learnt spinning in this house. Today, we are disentangling the fibers of truth and we are spinning the wheel of partnership that will create the warm cloth for the Earth Community in winter time.

HEROIC PATIENCE IN THE MIST OF GREAT PROVOCATION.

Thus, immersed in Gandhian ideas, inhaling the Ahimsa in the air, I’d like to share my perspective on where we stand now, given the provocations of some people of the administration in the University of California. Last Wednesday, I heard about the backwardness of the actions of the UCPD in Santa Cruz (torturing people), and now, in Berkeley, the construction of a third fence which only talks more about the desperation of the authorities. They know they are loosing the battle. As brother Adam says: “Even better, the police wants to loose it!”, because our enmity it is not against them, it is against their rule. 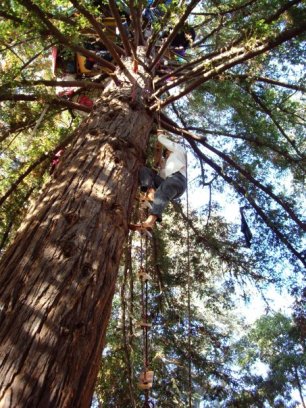 Sleeping deprivation; stealing our libraries and art supplies; harassing ARTivists and free souls; and the threat/plan of extracting our brave siblings, would be seen (by our generation and future ones) as an act of gross ignorance. All this against a people who without hurting anybody are seeking to gain true democracy and freedom through imagination, creativity and self-suffering.

Why? Because we know that the World is touched by sacrifice.

It is time to neutralize the power of the kleptocracy by exposing their lies, methods, and imperial agendas. In parallel, and more important, we can share our constructive programs of food sovereignty and permaculture. As a contagious laugh, we can spread every direct action combined with constructive work. It is not merely the plutocracy’s corruption and lies that are offensive. The revenues it brings to the war profiteers is not the only cost to the Earth Community.

Let the readers know that we are different: our means are our ends.

What do saving some few trees have to do with forming a scientific-artistic-rational-humanitarian society? For some people, apparently nothing. In reality much. It is not any single isolated act which can be called Satyagraha apart from the spirit being. To make our movement a greater success, we need to keep it nonviolent and disciplined; we need to stress this whole-system approach, which is both holistic and inclusive in nature.

We stand in need of assistance of indigenous people, athletes, staff, faculty, students, immigrants and all the community. We represent people of all races and from all climates. We have the blessings of millions of women and men belonging to the Earth Community. Our movement is about self-purification and no person can be purified against his/her will.

It should be remembered that many of us were like our opponents before our recognition of the necessity of _local_ connection with ALL life forms. I was one of those people who got transformed, not through attempt to change my mind, but through connection with other human beings. I would not then have liked to be bothered by supporting a local alternative when the “fast” choice was available. Because I in those days believed, no doubt wrongly as I now think, that I was “wasting” my time and “slow down, slow food, slow science” wasn’t a part of the equation. Even so we are not in the position to judge these “busy” people. Connecting with more hearts and consciences is enough work for us to miserably misuse our energy in a mental process which divides people (characteristic of the Empire). Our movement is about unity and global cooperation.

The purest man entering a greedy system will be affected by it and will be, in one way or another, instrumental in propagating its structural violence (proto-intelligence). You assist an administration must effective by obeying its orders and decrees. A proto-intelligent administration never deserves such allegiance. Allegiance to it means is partaking of the wickedness. Paraphrasing the Mahatma: “One of the lessons a planetary community yearning for Collective Intelligence needs to learn is to shed fears of loosing title, wealthy position, fear of imprisonment, of bodily injury and lastly death”. We are the Great Generation catalyzing the evolution of our species, the Grand Human Family.

Civil disobedience once begun cannot be stopped and should not be stopped so long as there is a single civil resister left free or alive. Our ranks will swell and our hearts strengthen as the number of our arrests by the UCPD increases. Those that have learnt the lesson of fearlessness and selfeffacement need no leader. When fear of jail disappears, repression puts heart into people.

Let’s combine civility with fearlessness. Civility as an inborn gentleness and desire to do the opponent a good. Be not impatient with our opponents. Personally, I’m impatient with myself.

Let’s appeal to their hearts (i.e. evoking the best that is in them).

Almost one lap around the Sun and we are still up. Our Satygrahis in the trees represents the honor of the Earth Community. Without malice, without anger, without angry word. True humility, patience and pertinacity.

Finally, directly from the Gandhian library: Hatred dissolves in the presence of love.

If there is such a thing as defeat for even a Satyagrahi, she/he alone is the cause of it. I shall hope the peoples of the Earth Community have wisdom and strength to withstand every temptation and provocation to violence, an old dying paradigm. Whether our opponents like it or not, the new paradigm of partnership and cooperation is emerging.

Closing the loop of Ahimsa, from the other side of the World, please receive all my blessings and love.

If you want to be a rebel, be kind. Human-kind, be both.